Benefits of a Floating Solar Array

Article published on www.engineering.com, in December 12th, 2015
Manchester England will soon be the home of Europe’s largest floating solar array. United Utilities, provider of water and sewer services for nearly seven million people in northwest England, is installing a solar farm on rafts that will float atop Manchester’s Godley reservoir. The three megawatt photovoltaic array will generate one third of the electricity used by the water treatment facility - about 2.7 GWh per year. (That number assumes an average of 2.4 peak sun hours per day, which is pretty low but probably correct for northern England, with its 53o latitude.) Although United Utilities is privately owned, its prices are regulated by the UK, so customers will ultimately see lower rates as a result of this investment. 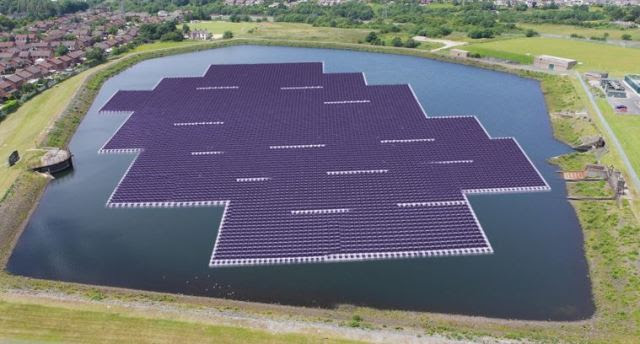 Economics aside, I’d like to focus on the technical benefits of solar panels floating on water. First and foremost, water is a great heat sink, and PV panels operate better when they’re kept cool. How much better?
[Pause for dramatic effect...]
Let’s do the math!

A typical PV panel has nominal current and voltage ratings. Output current is a function of the amount of light reaching the panel, and output voltage is primarily dependent on the load. Power is the product of  current times voltage. Nominal values are based on standard test conditions, typically a light intensity of 1000 w/m2and an operating temperature of 25oC.
Each panel has temperature coefficients that tell how much the voltage and current will vary with temperature. For example, a panel’s voltage and current may vary by -80mV/oC and 5mA/oC, respectively. (Note that the voltage has a negative temperature coefficient, so lower temperature results in higher voltage.) Cooling a panel by 1oC will increase its voltage by 80mV and decrease its current by 5mA.
How does cooling the panel affect power production?
Let's look at a commercial panel that provides 135W when its voltage is 17.7V and current is 7.63A. Suppose the panels are cooled by 5oC*. How does the voltage and current change?
Voltage will increase by 0.4V, giving 18.1V.
Current will decrease by 0.025A, giving 7.605A
The new power output is 18.1V x 7.605A = 137.7W, an increase of about 2%.
Two percent doesn’t seem like much, but with a 3 MW array, an extra 2% is 60kW. Over one year at that location, we’re looking at an additional 52 MWh of energy.
*Disclaimer: I don’t know exactly how much of a cooling effect the water will have on the panels. I know of a hybrid PV thermal panel that decreases cell temperature by 22oC, but that system pumps water under the panels for more efficient cooling. I suspect that floating on a reservoir will have a less dramatic impact, so I used 5oC in my calculations.

The floating array will cover more than 45,000 square meters of water, 75% of the reservoir’s surface. Godley is an open air reservoir, so it’s affected by evaporation. How much? Well, we’re getting out of my area of expertise, so I went to theEngineering Toolbox and found that under typical atmospheric conditions, a body of water with a 45,000 m2 surface area could lose more than 15,000 kg (almost 4000 gallons) of water every hour. If we assume that evaporation takes place primarily during the day in warmer months, we can cut that number by a factor of four, so the floating array could prevent the reservoir from losing about eight million gallons of water every year. (It won’t stop rainwater from getting in, though - the floats will have drainage.)

Anyone who’s ever owned a swimming pool knows that algae loves sunlight. Curtailing the growth of algae in open air reservoirs is often accomplished through the use of herbicides and algaecides, and nobody wants to drink those. I’ll leave it to the biologists to run the calculations on how much this array will reduce algae growth, but with 75% of the surface covered, I think it’s safe to say that United Utilities will spend less money on chemical treatments for algae reduction.
United Utilities’ Barry Tayburn and Chris Stubbs talk about the project: